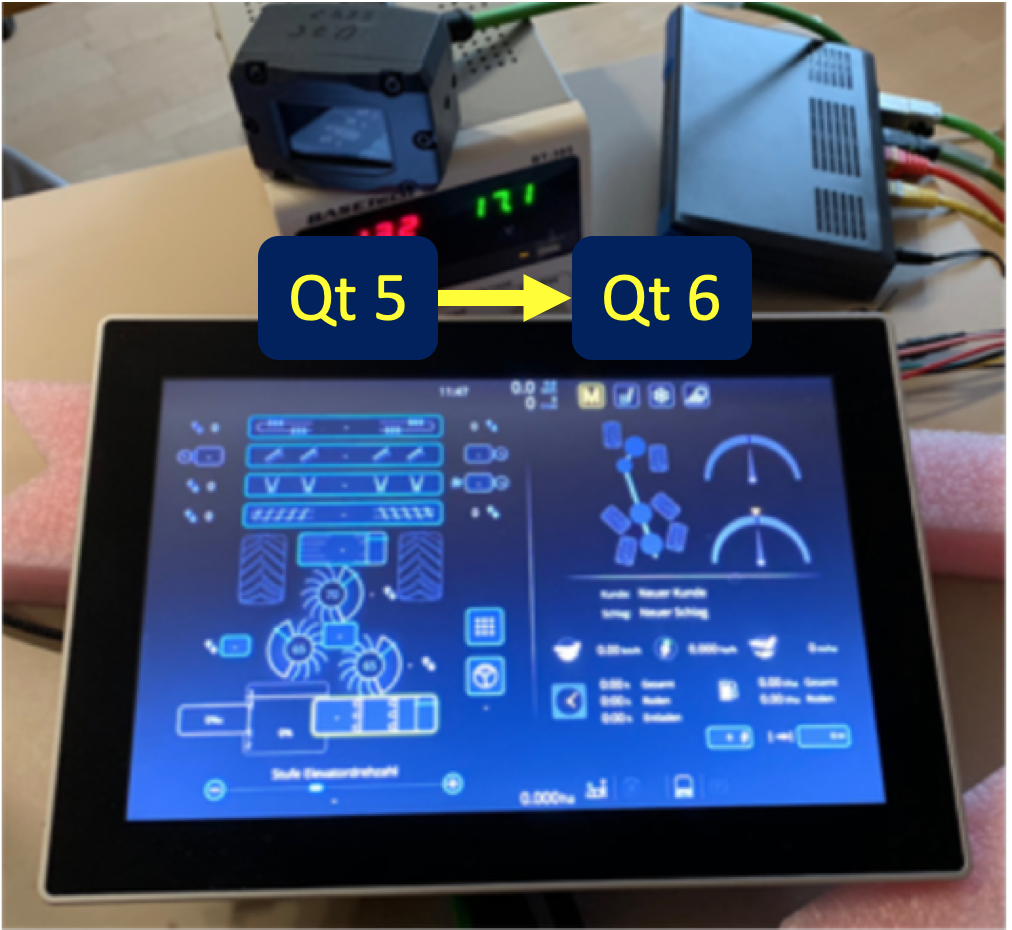 December 2020 saw the launch of Qt 6 – the first new major version since 2012. I wanted to find out how fit Qt 6.0 is for Qt embedded systems. I took the driver terminal of the ROPA sugar beet harvesters and migrated it from Qt 5.12 to Qt 6.0 as a side project. The migration was smooth, but incomplete. The driver terminal uses the Qt modules Multimedia and SerialBus, which haven’t been ported to Qt 6 yet. An update of the driver terminal would have to wait at least until the end of 2021, when Qt 6.2 will finally be feature-complete.

The migration to Qt 6 is my 5th Qt migration. The migrations from Qt 1 to Qt 2, from Qt 2 to Qt 3 and from Qt 4 to Qt 5 were fairly smooth. The migration of an IDE for formal verification and of the driver terminal of a forage harvester were a matter of 2-3 days. The migration from Qt 3 to Qt 4 was extremely painful. Migrating an IDE for Bluetooth development took me 6 months.

The guide Porting to Qt 6 from the official Qt documentation is the starting point for the migration. It suggests to port the application to Qt 5.15 in a first step and to Qt 6.0 in a second step. The Qt developers made the APIs of Qt 5.15 as similar as possible to the APIs of Qt 6.0 to reduce the migration efforts.

I’ll describe step by step how to change the CMake files, how to fix the warnings and errors flagged by the C++ compiler, how to find the QML incompatibilities and how to set up the development environment for Qt 6.0.

The harvester application consists of three CMake projects: the executable Main, the library Hmi and the library Can. We switch on the deprecation warnings by adding the line

to the CMakeLists.txt of each project. This macro triggers a warning for every function that is deprecated in Qt 5.15 or older. Sometimes the use of a deprecated function causes an error. The next subsections list the C++ compiler warnings and errors I encountered while migrating the harvester application from Qt 5.12 to Qt 5.15.

Error/Warning: ‘endl’ is deprecated: Use Qt::endl

Most occurrences of endl triggered the warning: 'endl' is deprecated: Use Qt::endl. Some occurrences triggered an error: ‘endl’ was not declared in this scope. The compiler couldn’t distinguish between std::endl and Qt::endl.

We replace each occurrence of endl by Qt::endl. All stream manipulators are now prefixed with the Qt namespace: for example, Qt::hex, Qt::fixed, Qt::left and Qt::ws.

The documentation of QDate::longMonthName hints at QLocale for a replacement. QLocale::monthName returns the long month name by default.

Error: no matching function for call to ‘QProcess::execute(const char [10])’

The variant of QProcess::execute with the command as its only argument was removed.

Error: ‘mapped’ is not a member of ‘QSignalMapper’

Before Qt 5.15, QSignalMapper::mapped had an overload for each of the four types of the single argument: QObject*, QWidget*, const QString& and int. We had to tell the compiler with a static_cast which overload to use in the connect statements. The overloads are obsolete in Qt 5.15.

From Qt 5.15, the four overloads have different names mappedInt, mappedObject, mappedString and mappedWidget. This eliminates the cast and makes the code simpler.

Before Qt 5.15, QMap distinguished between maps and multi-maps by insert and insertMulti.

Qt 5.15 introduces a new class QMultiMap, which inherits from QMap. We insert elements into a QMultiMap with insert now.

Error/Warning: ‘QString::SplitBehavior’ has not been declared

Like many other enum constants, QString::SkipEmptyParts was moved into the namespace Qt. The problem often occurs as a warning:

QVector<T>::append has gained a third overload for rvalue references T&& in addition to the existing const T& and const QVector<T>&. The C++17 compiler cannot distinguish between these three overloads.

We must help the C++17 compiler by spelling out the type of the appended element.

Unfortunately, we don’t have a friendly compiler telling us which lines of our QML code are deprecated. The documentation page Obsolete QML Types lists the known obsolete types, properties and methods. It’s worth going through these lists and checking our QML code for problems. I didn’t find any problems in the harvester QML code.

Before we test the most common usage scenarios (hopefully in an automated way), we update the versions in the import statements. I had to perform the following replacements in the QML files.

In my case, testing the most common usage scenarios unearthed a single problem about signal handlers or slots in Connections types.

The signal handler onMessageOccurred is implicitly defined as a function.

We must define onMessageOccurred as a function explicitly with an argument list.

I installed QtCreator 4.14, as it is the first release that fully supports Qt 6. QtCreator 4.14 adds proper syntax highlighting for Qt 6 code and some improvements for CMake. My development PC ran Ubuntu 18.04.

When I installed Qt 6.0 with the online installer, I encountered this error:

My Internet search lead me to QTBUG-89218. The comment section reveals that Ubuntu 18.04 is not a supported development platform any more. We have two options. We can upgrade to Ubuntu 20.04 or newer or we can build Qt 6.0 from sources. If our application uses one of the Qt modules not yet ported to Qt 6 (e.g., QtSerialBus, QtMultimedia, QtWebEngine), we will have to build Qt 6.0 from sources any way and port the missing module to Qt 6.0. I ended up doing both.

The CMakeLists.txt files refer to Qt 5 explicitly in find_package and target_link_libraries commands.

Qt5 was built on C++11. The top-level CMakeLists.txt file contained the following lines.

Setting Up the QtCreator Kit

When I started QtCreator 4.14 the first time after installing Qt 6.0, the auto-detected kit for Qt 6.0.0 was messed up. It referred to outdated C and C++ compilers from a Qt 5.14 installation and the system CMake 3.16 from Ubuntu 20.04. We can fix this mess in the QtCreator dialog Tools | Options | Kits.

When we run CMake to configure the project, the CMake command should look similar to this:

We can force a re-configuration of the project by removing the build directory recursively and by running Build | Run CMake.

The Core5Compat library adds the obsolete Qt 5 classes and functions that didn’t make it into Qt 6. We can add Core5Compat to the find_package commands and Qt6::Core5Compat to the target_link_libraries commands. If we do, the compiler will flag occurrences of QRegExp, QTextCodec and some other classes from Qt6::Core as warnings instead of errors (see this post for a mapping between obsolete Qt 5 classes and their Qt 6 replacements).

Core5Compat makes the transition from Qt 5 to Qt 6 smoother. We must fix fewer errors before our application builds and runs again. I didn’t use Core5Compat, because I learned about it too late. I could fix the resulting errors in a mechanical way like replacing QRegExp functions by their counterparts in QRegularExpression. I spent a lot more time on adapting some C++11 code to the higher standards of the C++17 compiler and on porting QtSerialBus in a quick-and-dirty way to Qt 6.

Qt 5 modules like Multimedia, SerialBus, SerialPort, RemoteObjects, Virtual Keyboard, Charts, Bluetooth, WebEngine and WebView didn’t make it into Qt 6 (see this post for a complete list). Few will become available in Qt 6.1 (planned for April 2021) and the rest in Qt 6.2 (planned for September 2021).

The application uses Multimedia to show two video streams in the upper and lower half of a full-screen widget. I avoided porting Multimedia to Qt 6 by commenting out the few lines referring to Multimedia.

We first build Qt 6.0.0 from Git. Then, we build SerialBus in an extra step. We download the sources of SerialBus with the command (executed in the top-level directory of the source tree):

SerialBus is still built with QMake. From the top-level build directory, we call

As the harvester application doesn’t use ModBus, we can eliminate all the errors and warnings about ModBus by removing the ModBus source and header files from qt5/qtserialbus/src/serialbus/serialbus.pro. Porting SerialBus to Qt 6 involved replacing several occurrences of QString::midRef and QString::leftReft by QString::mid and QString::left, respectively.

The Can library of the harvester application depends on SerialBus. We must provide CMake configurations files for SerialBus itself (Qt6SerialBusConfig.cmake) and for each CAN plugin (e.g., Qt6SerialBus_SocketCanBusPlugin.cmake). These files are located in /path/to/Qt6.0.0/lib/cmake/Qt6SerialBus. I took the quick-and-dirty route and replaced every occurrence of 5, 5.15 and 5.15.2 by 6, 6.0 and 6.0.0, respectively – until running CMake on the application succeeded.

The function it.key() returns an object of type std::pair<QString, QVariant>, which is the same as the key type of the QMap. QMap requires the definition of operator< on the key type to know where to insert new values.

QMap compares whether the pair p1 is less than p2, where both p1 and p2 have the type std::pair<QString, QVariant>. If p1.first is equal to p2.first, the comparison must evaluate p1.second < p2.second. G++-9 rightly complains that operator< is not defined for QVariants. G++-7 overlooked the missing operator< for QVariants.

Converting a QVariant into a QString with QVariant::toString() works for most types supported by QVariant. As m_entities only uses supported types for the second element of its key, we can safely replace QVariant by QString in the key type.

Error: QTextCodec: No such file or directory

The class QTextCodec was removed from Qt 6 and was replaced by the new class QStringConverter. Similarly, the classes QTextEncoder and QTextDecoder were replaced by QStringEncoder and QStringDecoder (see this post). Code using any of the old classes doesn’t compile.

Error: QRegExp: No such file or directory

The function for matching a string against a regular expression has got its natural name: match (instead of indexIn). It returns a QRegularExpressionMatch object match instead of an index. We retrieve the nth captured substring by calling match.captured(nth). match.hasMatch() tells us whether the string matched the regular expression.

In Qt 5, the function extractVersion implicitly converts the QString filename into a QFileInfo object with the constructor QFileInfo(const QString &). In Qt 6, this constructor is marked explicit, which blocks the implicit conversion.

We get rid of the error by calling the constructor QFileInfo(const QString &) explicitly.

The forward declaration of IntegerRangeModel was good enough for the Q_PROPERTY definition in Qt 5, because days is declared as a pointer. Qt 6 added a static assertion. A further error message documents the violation of the static assertion:

Originally, the first argument of typesAreAffine had the type QVariant::Type, which was replaced by QMetaType::Type by the previous migration step. The function QSqlField::type with the return type QVariant::Type doesn’t exist in Qt 6.

Starting with Qt 6.0, QList<T>::size() has the return type qsizetype, which is equivalent to long long int. The class DirectoryModel indirectly derives from QAbstractItemModel, which declares the pure virtual function rowCount like this:

The return statement may narrow a long long int value to an int value, which may change the value. It seems that the Qt developers forgot to change the return type of rowCount from int to qsizetype.

Sometimes there is no way around a static cast. This is one of those times. We force the qsizetype value into an int value and silence the error.

We change the return type of the custom-defined hash function from uint to size_t.

The static function QQmlFileSelector::get returns the file selector currently active on the QML engine. It is obsolete in Qt 6, because it duplicates the functionality provided by the QQmlFileSelector constructor.

We replace the forward declaration by the inclusion of the header file.

Error: ‘QLatin1Literal’ was not declared in this scope; did you mean ‘QStringLiteral’?

Good news first: Migrating the driver terminal with 50K lines of hand-written code and another 74K lines of generated code from Qt 5.12 to Qt 6.0 was a very smooth affair. It took me 1.5 days. Writing this post took me longer.

Now for the bad news: The driver terminal cannot be released with Qt 6 before the end of 2021. Qt Modules like MultiMedia, SerialBus, RemoteObjects, Charts and WebEngine didn’t make it into Qt 6.0. When I look back at my last 15 years of architecting and building Qt embedded systems, I couldn’t have built a single one with Qt 6.0.