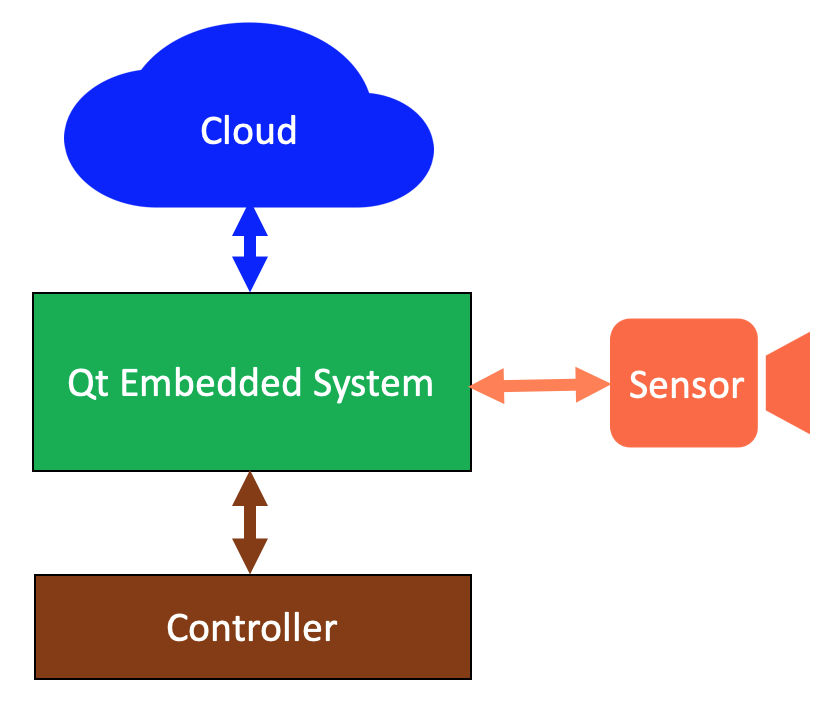 Which system-on-chip is best suited for your Qt embedded system? Should you build a custom Linux system with Yocto, use a container OS or a desktop Linux? Should you use Qt Commercial or Qt LGPLv3? How will the system be updated? What are the operating conditions of the system? How does the system communicate with sensors, ECUs and the cloud?

This is only a small selection of the 50+ questions in this post. You best tackle these questions early in the project. Fixing wrong decisions becomes exponentially harder with the duration of the project. Your decisions can make or break a project.

Getting basic architecture decisions right at the beginning of a project saves us a lot of time and money later. It may even make or break a project.

In the rest of this post, I list lots of questions that you should ask when starting the development of a Qt embedded system. The answer to these questions may vary from project to project. The two home appliance makers choosing different Qt licenses is a good example. Each of them had their good reasons.

I divided the questions into seven areas: Applications and Window Manager, Operating Systems, System-on-Chips, Operating Conditions, Cloud, Controller and Sensors. I plan to write one post for each area and four cases studies from my own experience. The cases studies will cover an in-car infotainment system, a driver terminal of a harvester, an operator terminal of an industrial machine and a medical device.

Trying to answer the questions will increase the chances to succeed with your current or next Qt embedded system. Here is the list of 50+ questions. Feel free to send me your questions.

A Qt embedded system runs one or more applications. The applications have a human-machine interface (HMI). The window manager composes the application HMIs into one system HMI.

Many systems show only one application. They don’t need a window manager. This may be true for the first generation of your system, but not for the second or third. You want to mirror the screen of your machine terminal via VNC to the office PC of a support person sitting half way around the world. With a window manager, it’s not much more than adding the VNC package to the Yocto build. Without a window manager, a few days of programming are involved.

In-car infotainment systems are the prime examples of multi-application systems. They come with some standard applications like radio, media player, navigation and settings. They also allow third-party apps or apps from smartphones over VNC (Apple CarPlay, Google Auto, MirrorLink). A special-purpose window manager is a must for these systems. General-purpose window managers like X11 are rarely the first choice, because they come with a huge overhead and are hard to control.

As an architect, you must answer these questions:

Qt embedded systems run on Linux, real-time operating systems (RTOSs) like QNX, VxWorks and FreeRTOS and even bare metal. By far the most common operating system (OS) is Linux custom-built with Yocto. Desktop Windows and desktop Linux are widely used in operator terminals for production lines and industrial machinery. This variety raises a couple of questions.

Toradex’s Colibri family of Computer-on-Modules (CoMs) has eight members. The CoMs have one to four ARM Cortex-A5, Cortex-A7, Cortex-A9 or Cortex-A35 microprocessor cores. Some have an additional ARM Cortex-M4 microcontroller. Half of the CoMs have a 3D GPU for OpenGL graphics acceleration. The CoMs differ in RAM, flash and peripherals.

These eight CoMs are only a tiny selection of available system-on-chips (SoCs) for Qt embedded systems. You can choose from microcontroller and microprocessor SoCs manufactured by NXP, Texas Instruments, NVIDIA, Qualcomm, Renesas, STM, Allwinner, Mediatek and many other companies. And you shouldn’t forget the Raspberry Pi SoCs.

The answers to questions in the other sections narrow down the SoC candidates. The following questions help you to reduce the candidate list even further.

Direct sunlight can wash out the contents on a display in a car, lorry, tractor or construction machine. Using a high-luminosity display or shielding the display from sunlight helps. A wide viewing angle and few reflections are other important attributes of good displays.

Scales for weighing meat or cheese must withstand high-pressure jets of water with aggressive cleaning substances. Bike computers must resist dust, dirt and water. When you make devices water-tight and dust-tight, you must take care that the SoC doesn’t overheat. The implication may be that you must use a less powerful SoC.

Qt embedded systems rarely work in isolation these days. They are connected to the cloud for remote support, monitoring and control.

Controllers regulate the heat of an oven, the rotational speed of a turbine, the speed of a car or the volume of a TV. They send back the current temperature, speed or volume to the system. The communication happens over CAN or Ethernet networks, serial connections like RS-232 and RS-485, Zigbee, LoRa and many other ways.

The infotainment systems in cars or the operator terminals in tractors, harvesters and cranes often double up as IoT gateways. They collect data from multiple sensors and from the machine, filter the relevant data and send them to the cloud. Cloud applications log the data for later evaluation, detect problems early, diagnose the problems or send alerts to technicians.

A VNC server lets systems mirror their screen contents to computers anywhere in the world. Support technicians see on their PC monitors exactly the same what harvester drivers see on their terminals. Remote support becomes so much easier than over the phone.

Instead of sending the screen contents, the Qt embedded system could send the data over the Internet to office PCs, phones and tablets – for technical support, for fleet management, for accounting, for remote supervision, for designing wooden or metal profiles and for many other purposes.

You can run the Qt application from the embedded system on the remote computers with little changes and add some more features. Qt makes this easy as it is cross-platform. Although this is the most time-efficient option, many companies re-implement the embedded Qt application using a web framework like Angular, React and Electron.

Web frameworks save you from any deployment hassles. Compiling the Qt application into WebAssembly may give you the best of both worlds on PCs and possibly on ever more powerful phones and tablets: no re-implementation and no deployment overhead.

The controller in vehicles comprises several electronic control units (ECUs). There are ECUs for the steering, engine, brakes, cutting unit, air condition, joystick, camera system, telematics unit, etc. The driver terminal communicates with the ECUs over one or more CAN buses. The CAN messages are encoded to the J1939 standard so that ECUs from different vendors understand each other.

Manufacturers of cars, of lorries and of agricultural, construction and forest machinery have a tendency to maximise the number of ECUs. 20-30 ECUs in a harvester and 60-70 ECUs in a car are common. Firmware updates of the ECUs and communication between the ECUs become a nightmare.

Some manufacturers – with Tesla being the most prominent example – merge most of the ECUs and the infotainment system in one super ECU. Semi-autonomous driving and harvesting require inputs from many ECUs. The super ECU makes the communication between the “soft” ECUs faster and easier. The same is true for the communication between the teams developing the soft ECUs.

The border between Qt embedded systems and controllers becomes blurry for consumer devices. For a TV, the system and the controller (DVB-C receiver) are integrated in the same device, may be even on the same board. For streaming boxes, the border disappears, unless you regard the video decoding circuitry on the SoC as the controller.

Wired communication between system and controller happens over Ethernet, CAN, Modbus, RS-485 and many other physical links. Wireless communication links include Wi-Fi, Bluetooth, LoRa and Zigbee.

Harvesters easily have half a dozen video cameras also known as image sensors. One camera is trained on the cutting unit, one or two cameras show how the crop flows through the machine and three or four cameras are combined into a surround view of the harvester (e.g., when driving backwards).

Image recognition, whether a plant is a weed or whether grains are cleaned properly, is slowly finding its way into harvesters. GPS-guided autonomous driving is fairly well established. If the SoC of the Qt embedded system is powerful enough (including hardware acceleration for inferencing on deep neural networks), image recognition or GPS guidance can be integrated in the system. Otherwise, they come in their own hardware boxes (ECUs) and send their results via the controller to the system.

Sensors can measure nearly everything including temperature, humidity, gas concentration, air quality, smoke, motion, distance, acceleration, pressure, sound and flow. They send their values to the system over wireless links like LoRa, Zigbee, Wi-Fi and Bluetooth or over wired links like Ethernet, RS-485 and CAN. The system may act as an IoT gateway for the sensor values.

Answering the above and other questions yields architecturally significant requirements (ASRs).

Constraints Unchangeable design decisions, usually given, sometimes chosen.
Quality Attributes Externally visible properties that characterise how the system operates in a specific context.
Influential Functional Requirements Features and functions that require special attention in the architecture.
Other Influencers Time, knowledge, experience, skills, office politics, your own geeky biases, and all the other stuff that sways your decision making.

The answers to the questions and hence the ASRs depend on the specific system and on the time. So, it makes sense to choose a specific system. Driver terminals for harvesters are the obvious choice for me, as I have built the terminals of the KRONE BiG X forage harvesters (2012-2014) and the ROPA Tiger 6S sugar beet harvesters (2017-2019). In this series, I am creating the system architecture for a driver terminal for a fictitious project starting in 2021.

We’ll unearth many ASRs for the harvester terminal throughout the series. Based on the ASRs, we’ll define the system architecture and select the SoC.

So Far in the Series

So far, the series on the Architecture of Qt Embedded Systems comprises the following posts.