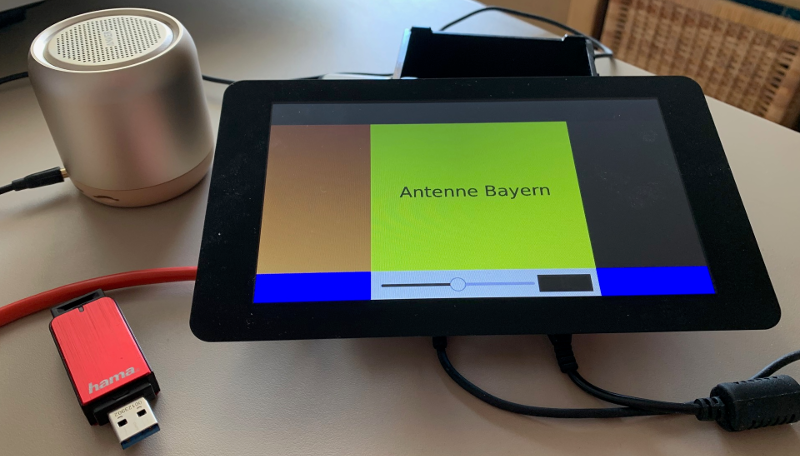 In Part 1 of the series on Qt Embedded Systems, we build a custom Linux image with Yocto for the Raspberry Pi 3B. When we power on the embedded device, it starts an Internet radio application – called Cuteradio. This QML application is very simple: it can only play a single, hard-wired station. Despite its simplicity, the application requires the Qt modules Qml, Multimedia, Gui, Network and Core, GStreamer 1.x and the platform plugin eglfs, which is a simple, OpenGL accelerated windowing system.

We need a powerful PC for building Linux images with Yocto. The PC runs a Ubuntu LTS version (16.04 or newer) natively and is powered by at least an Intel Core i7 with four cores and hyper-threading. It has a minimum of 16 GB RAM and 100 GB free disk space. The build of the example Linux image, for example, takes 53 GB disk space.

A very fast Internet connection is a big advantage. The first build downloads gigabytes of sources for hundreds of packages. With a bandwidth of 50 Mb per second, downloading may take longer than building the example image. Once we downloaded all sources, we can work without an Internet connection and share the sources between builds.

We install Docker as described in the post Using Docker Containers for Yocto Builds. Yocto versions are tied to certain versions of Linux distros. For example, Yocto 2.4 Rocko was released in October 2017. If we use Ubuntu 18.04 or newer for Rocko builds, the builds will fail with strange errors. The same build will work without any problems, if we use Ubuntu 17.04 or older. In the Docker container, we can run the Ubuntu version that best matches the Yocto version.

I bought a Raspberry Pi starter kit similar to this kit in 2017. It contained

My understanding is that the Linux image for the 3B should work with little or no modifications on the 3B+. I haven’t tried yet for want of a 3B+. I would be interested in your experiences.

Setting Up a Docker Container

We create a Docker container, in which we can build the Linux images with Yocto. We clone the repository dr-yocto into a working directory (/public/Work for me) and switch to the tag ubuntu-18.04.

The repository contains two scripts and a Dockerfile:

The calling syntax of the build script is

The first argument is the <tag> for the Docker image. The name of the Docker image is dr-yocto:<tag>. The second argument <dir-path> is the path to the directory containing the Dockerfile. For example, we build the Yocto image dr-yocto:18.04 by calling

As defined in the Dockerfile, the build process

Having root privileges in the container comes in handy, when we build a new Yocto version for the first time. There are always some packages missing from the official list of required packages. A quick sudo apt-get -y install <package> solves the problem. Once we know whether the package solved the build problem, we add it to the list of packages in the Dockerfile. This saves us from re-installing the packages for the container over and over again.

We run the Docker image by calling

The argument <tag> is the same tag as passed to build.sh. The command starts a bash shell in the container dr-yocto:<tag>. We test the Docker image dr-yocto:18.04 with the following command.

The thousands of metadata files (build recipes, configuration files, etc.) needed to build a Linux distro with Yocto are organised into layers. Our example system consists of five layers.

The next version of our product or another product may use a different SoC. Then, we add the BSP layers for these SoCs after the meta-qt5 layer and before the poky layer.

The repo tool needs to know from which URL to fetch the layer repositories and into which directory to put them. We define this information in a manifest file. We initialise the umbrella project in the directory /public/Work/cuteradio-thud with the commands

We clone the layer repositories into the directory ./sources with the command

This creates the following directory structure:

The revision in the project tag can be a branch, tag or commit SHA. Branches and tags can and will change to stay up-to-date with bug and security fixes. Every time we run repo sync, we may get modified metadata files and hence images. This is OK during development. For releases, we need a specific revision that never changes. Hence, we specify the revision by a commit SHA.

The build process reads the local.conf file last, after parsing all the metadata files in the search paths given in bblayers.conf and after evaluating some more configuration files. The local.conf file is a last resort for defining the target Linux image. It is also a quick and dirty way to get a Linux image up and running on a target device. We’ll clean up the “dirt” in a later part of the series.

The build is only allowed to use metadata files from the directories listed in the bblayers.conf file. If a recipe in the meta-cuteradio directory depends, for example, on a recipe not contained in any other directory, the build will fail. Finding a working and minimal list of layer directories is an iterative process.

Some layers like poky or meta-openembedded are super layers that contain multiple layers. Listing just the directory of a super layer like

The build environment configuration local.conf for Cuteradio looks as follows.

As the default distro is good enough to get started, we set DISTRO to poky. We exclude any X11, Wayland, Vulkan and Directfb features from the Cuteradio image with DISTRO_FEATURES_remove. The “window system” EglFs, which allows a single process to render to a single window, is sufficient for our first steps. As an Internet radio certainly needs sound and benefits from smooth animations, we include the ALSA and OpenGL features with DISTRO_FEATURES_append. It’s good practice to move distro-related configurations to a separate distribution configuration file.

Building the Linux Image with Docker

Now, we have all the pieces together to spin up the Docker container, to intialise the build environment and to build the Linux image.

We initialise the build environment with the following two commands.

When we run the script oe-init-build-env for the first time for the build environment build-rpi3, it copies the sample configuration files bblayers.conf.sample and local.conf.sample from the directory $TEMPLATECONF to build-rpi3/conf/bblayers.conf and build-rpi3/conf/local.conf, respectively. The message tells us about this. The script changes the working directory to /public/Work/cuteradio-thud/build-rpi3 and sets some environment variables like BBPATH and BUILDDIR.

When we run the script oe-init-build-env the next times, we need not set TEMPLATECONF and we won’t see the messages about copying the configuration files. The script enters the already existing build environment silently.

It’s time for the big moment. We start the build of our custom Linux image with BitBake. BitBake is Yocto’s build engine. It takes the metadata files (recipes, configurations, etc.) as input. It figures out which tasks must be re-run for each recipe and schedules these tasks for highly parallel execution. The tasks for building a recipe including fetching the source code, patching the source code, configuring the build, running the build, installing the relevant files of a package (e.g., executables, libraries) and packaging the installed files in formats like ipk, deb and rpm.

The first BitBake run takes a couple of hours, as it must download the source code for hundreds of packages and execute nearly 4000 tasks. Bitbake shows progress information about the tasks it is working on. The next BitBake runs will be a lot faster, as BitBake performs incremental builds.

Running the Linux Image on a Raspberry Pi

Back on our development computer, we locate the Cuteradio image for installation on an SD card.

The first file is the Cuteradio Linux image, is time-stamped and has a size of 784 MB. The second file is a symbolic link pointing to the first file. The SD card, to which we write the image, should have a size of at least 1 GB.

Caution: It is crucial to figure out the correct name of the SD card. Writing the Linux image to the device file will delete all the data on this device – past any recovery.

We unmount the device files of the SD card.

We write the Cuteradio image to the SD card.

We remove the SD card from the USB adapter and plug it into the SD-card slot of the Raspberry Pi. We power on the Raspberry Pi. After a couple of seconds, the Internet radio application starts automatically and plays the hard-wired radio station Antenne Bayern.

SSH Login to the Raspberry Pi

First, we can log in to the router of the LAN that contains the Raspberry Pi and display a list of all devices in the LAN. The Raspberry Pi is the new device without a name. My device got the IP address 192.168.1.84.

Second, we can check the system messages when the Raspberry Pi powers up. We look for a message like

The challenge is to spot the IP address before the Internet radio is displayed.

Once we know the IP address, we log in to the Raspberry Pi with this command:

This post is part of a series on Qt Embedded Systems. I plan to write one post per month. The goal is to build a full-blown Internet radio running on a custom embedded Linux system powered by a Raspberry Pi. I’ll walk you through all the steps needed to build a product. Topics will include QML, Qt, C++, Wayland, Wifi, Bluetooth, Yocto, fast start-up, OTA updates, etc.

So far in the Series:

I have plenty of ideas for the next posts: